MongoDB pricing depends on several factors, including cluster configuration, usage patterns, and more. Here’s how to make sense of your MongoDB costs.

MongoDB is a popular non-relational database among developers of distributed apps. This Not Only SQL (NoSQL) database system delivers versatility, high scalability, and a flexible querying model. MongoDB is also remarkable for its fault-tolerance, self-healing, and real-time analytics capabilities.

MongoDB pricing is pay-as-you-go, which is a usage-based pricing model. But exactly how much you spend depends on which edition of MongoDB you choose:

Something else. In particular, the Community and Enterprise editions of MongoDB are self-managed and support multi-cloud deployment — and so follow a different billing method from the MongoDB Atlas product.

While it offers limited features, the open-source version offers plenty of capabilities and support, including native sharding, flexible schema, automatic failover, built-in replication, and support for ad hoc queries. MongoDB Community Server is free to use under the Server Side Public License (SSPL). This means that you can tweak and use the source code, but you cannot use it for a commercial SaaS product.

Two more quick facts. First, MongoDB Compass is also free to use. Compass provides the graphical user interface (GUI) that queries, analyzes, and manages data in your MongoDB clusters. You can download it for macOS, Windows, and Linux.

Here’s a closer look at how MongoDB Atlas billing works.

How Does MongoDB Atlas Billing Work?

Pricing for MongoDB Atlas is usage-based because it charges per hour of cluster usage. However, several factors affect your MongoDB Atlas costs, including your:

MongoDB Atlas follows a Database-as-a-Service (DaaS) model that enables developers to use a robust document data model with a unified query interface for high availability, scalability, and data protection.

Atlas bills the capabilities based on the cluster tier you choose.

What are the different MongoDB clusters?

The default MongoDB Atlas cluster tiers range from M0 to M700, all of which leverage MongoDB 5.0. Each tier has its own default memory (RAM) and storage capacity, as well as maximum storage speed (queries and read/write operations), all of which make up the cluster's hourly cost.

The following table summarizes how an M0 cluster differs from an M2 or M5 shared cluster, as well as an M10 or larger dedicated cluster. 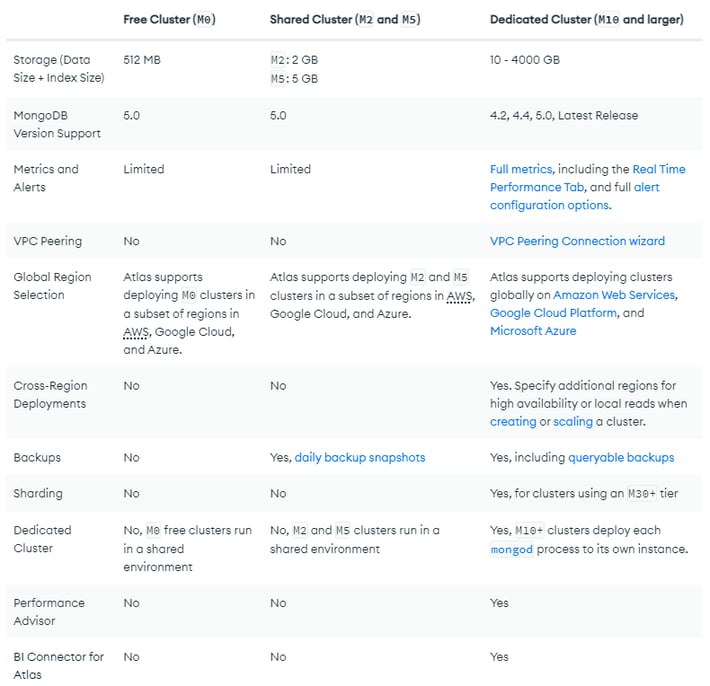 MongoDB Atlas enables you to see the costs of different clusters before you can change them. You can see the cost of your preferred configuration (without data transfer fees) within the Cluster Overview box. Billing for a specific cluster starts when you upgrade an M0 free cluster to an M2, M5, or larger cluster tier.

The capabilities discussed above explain MongoDB pricing in terms of what you are paying for. The next question is.

How Much Does MongoDB Cost, Really? 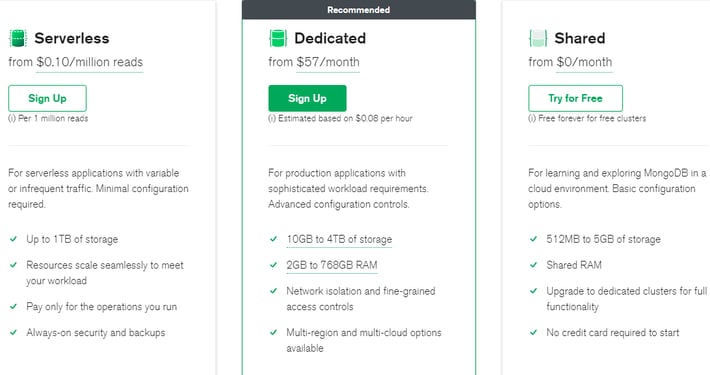 Pricing also varies based on the cloud provider you use. Here’s what all of this looks like:

The MongoDB Atlas free tier is available with M0, M2, and M5 cluster tiers within a sandbox environment, and includes up to 5GB storage, 512 MB RAM shared, and shared vCPU. The free tier also supports monitoring and alerting and diagnostics and performance optimization tools.

Dedicated MongoDB clusters start at $0.08 per hour or $57 per month (or $95 per month for dedicated multi-region clusters).

This tier delivers up to 96 vCPUs, 768 GB of RAM, and 4 TB of storage (all per shard). You also get everything in Free Tier and Shared, plus Atlas Data Federation, BI connector, LDAP integration, granular database auditing, private networking, uptime SLA, multi-cloud, multi-region, elastic scalability, and online archive.

In terms of backups, you can get point-in-time recovery and on-demand snapshots. You can set up configurable snapshot and retention policies.

It charges $0.1 per million reads. You also get up to 1 TB of storage, scalable RAM and vCPU, and backups (two daily snapshots with optional extended retention).

AWS instance type, AWS region, consumption, and other factors, like data transfer and backup policy, will also affect your MongoDB spend on AWS.

Something to note here is that AWS, GCP, and Azure use a credit billing system, where 100 consumption units equal a single Atlas credit (1 credit), which, in turn, equals one dollar ($1).

Your application's RAM, IOPS, Storage, and other requirements determine the rate at which Consumption Units are used up, and will be charged on top of fees for using GCP, AWS, or Azure services.

Here is the pricing for MongoDB Atlas on AWS by instance type in the US East 1 (North Virginia) region: 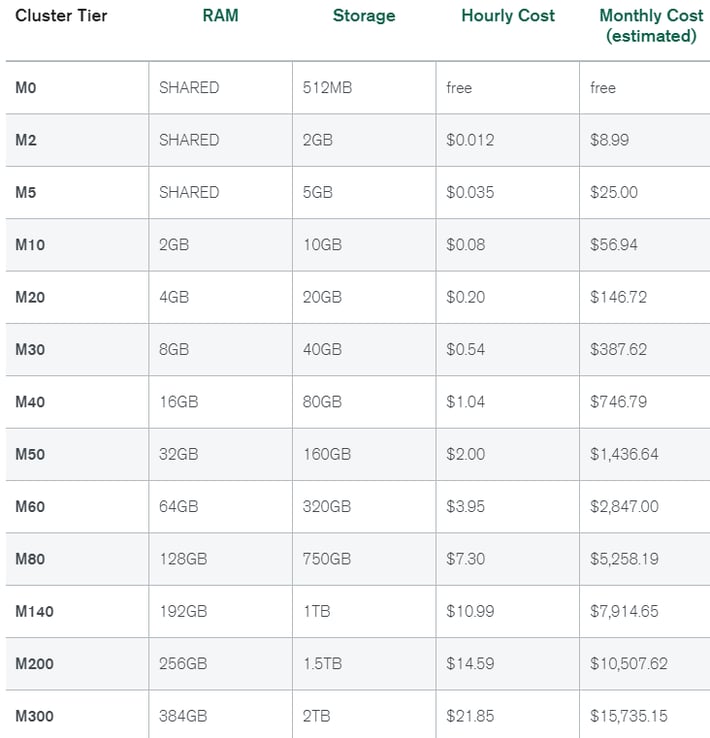 Alternatively, you can use a variety of low-CPU instance types but comparable RAM and storage capacities, like these: 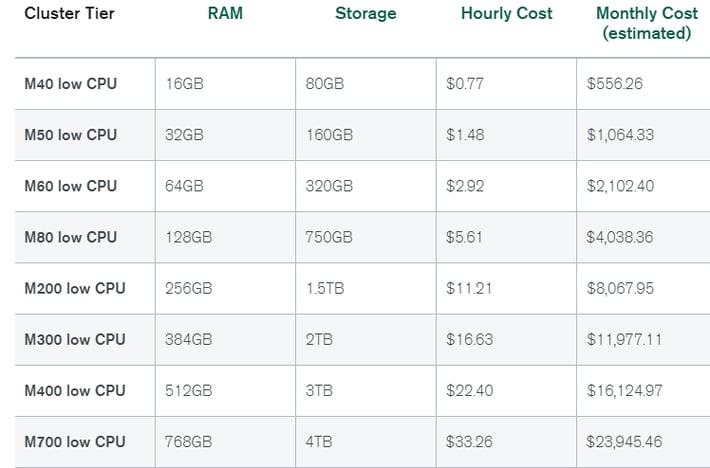 Other factors that affect pricing for MongoDB on AWS include:

MongoDB on Azure pricing is also pay-as-you-go, billed monthly. The MongoDB Free Tier is also available on Azure for starters. Pricing starts at $0.01 per Consumption Unit.

Precisely how much you’ll spend will depend on your cluster configuration (Azure instance types, size, region, vCPU, and RAM), Availability Zone, and usage. Here are the available MongoDB cluster tiers on Azure to give you an idea: 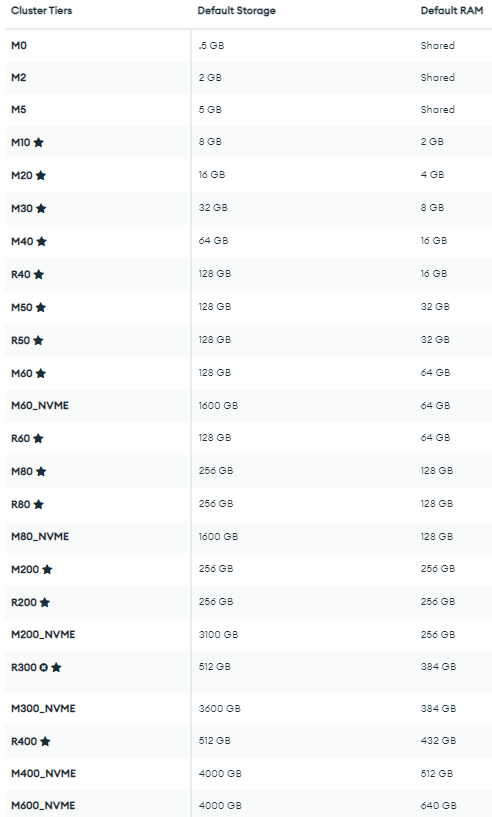 The starred instances/cluster tiers are available as multi-cloud clusters.

Pricing for MongoDB Atlas on Google Cloud is pay-as-you-go per hour, billed monthly at $0.01 per Consumption Unit. Again, your cluster configuration, availability zone, and usage patterns will directly affect how much you actually spend. You can get started with the MongoDB Atlas Free Tier on GCP.

You get the following MongoDB cluster tiers on GCP:

We get it. Figuring out how MongoDB pricing works can be confusing. There’s an easier way to collect, analyze, understand, and optimize your MongoDB costs.

How To View, Control, And Optimize MongoDB Costs With CloudZero

Many companies use MongoDB internally, such as for data analysis and research. Some use cases are external-facing (and so their costs should reflect in margins and COGS). Others use the platform for both, so they incur several different types of costs.

With shared clusters and massive billing data, it's tough to tell what’s driving your MongoDB costs, so you can optimize them. CloudZero solves this problem.

With CloudZero, you automatically ingest massive amounts of usage and associated insights from MongoDB. CloudZero normalizes the data, analyzes it, and presents it in a visual, contextual, granular, and actionable way, like this:

to see CloudZero in action!

Here are some answers to some frequently asked questions about MongoDB pricing.

MongoDB Community Server is free and open-source to anyone who wants to use it. MongoDB Enterprise Advanced Server is self-service but not open-source. MongoDB Atlas is a fully managed version available through AWS, Azure, and Google Cloud.

With up to 5GB of storage, shared RAM, and shared CPUs for use on M0, M2, and M5 MongoDB cluster tiers, the MongoDB Atlas Free Tier is free forever.

How much does MongoDB cost on AWS?

Shared instances of MongoDB on AWS cost $9 per month while dedicated clusters/instances cost $60 per month.

Costs vary by usage and cluster/instance configuration, and are charged at $0.01 per Consumption Unit ($1). Data backup, data transfer, and data storage speed may also affect your MongoDB costs on AWS.