At best, spam calls are annoying. At worst, they’re damaging; in 2020, Americans lost nearly $30 billion to phone scams. Whether they take time out of your day or money out of your bank account, spam calls are no fun, and they’ve caused people to mistrust any number that isn’t already saved in their contacts.

Enter Hiya. Spun off from Whitepages in 2016, Hiya’s twin goals are to prevent unnecessary spam calls and add credibility to legitimate calls — or, in their words, Protect and Connect. With hundreds of millions of users, and enterprise customers who put the “prominent” in “prominent” (Google, AT&T, Samsung, Xfinity, and more), Hiya plays a central role in purifying the airwaves — not just in America, but around the world.

A global burden is a lot to handle — for anyone, but especially for a company with <1,000 employees, but Hiya has managed to protect and connect over 200M users worldwide. 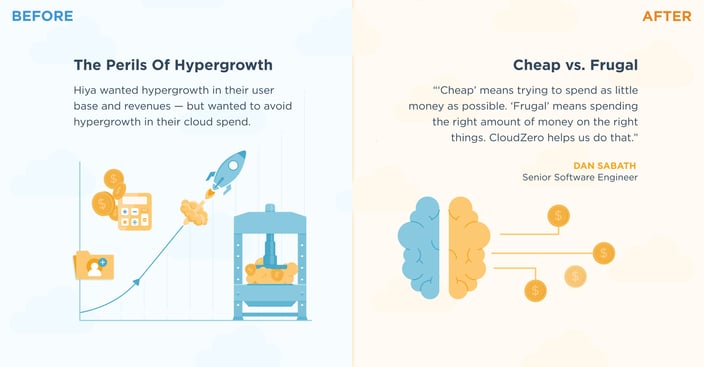 “We’re a small company,” said Dan Sabath, Hiya’s senior software engineer in charge of FinOps. “Efficiencies of scale are really important, and so we have to be sure that we’re leveraging our cloud resources efficiently.”

As Hiya grew, their cloud costs (AWS, primarily) scaled up to support their increasingly large customer base. As is essential for all fast-growing, cloud-based companies, Hiya’s finance team needed to connect their cloud investment to business outcomes, strengthen their unit economics, and put themselves in a position to scale as efficiently as possible. .

“They also started asking about projections,” Dan said. “They’d ask, ‘If we bring on this client, how much can we expect to spend in AWS?’”

The team had previously built their own cost tracking tool over the course of two years. While it provided them with some visibility, it took about a week a month to manage the tool — time which could have been spent on other strategic initiatives. “It was super-high maintenance,” he said. 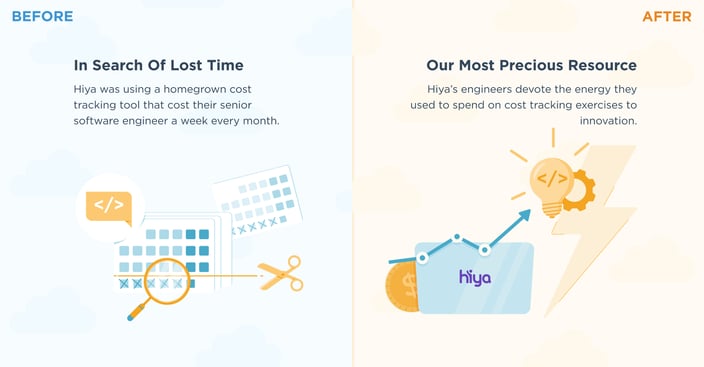 Dan and his team understood that in order to maintain their market leadership, Hiya needed to focus their time on building differentiated value, rather than internal tooling. Meanwhile, strategic questions kept coming up, and Dan needed a way to answer them. They ranged from the complex — “Do we need all of our data in every global region?” — to the basic: “How are we doing this month?”

Having used cost tools in the past, Dan set out to find one that had more exploratory functionality — that is, a platform that allowed him to drill into the details of his cloud spend with just a series of clicks.

Dan discovered CloudZero, a cloud cost intelligence platform that delivers useful data about products and features to the engineering teams responsible for building them.

Hiya’s overarching goal boiled down to one word: efficiency. In part, that refers to efficiency of service: They need to be able to distinguish spam calls from legitimate calls near-instantaneously, all around the world. The less time it takes them to do this for any given call — i.e.: the lower their app’s “latency” — the more Hiya’s customers are inclined to trust them, and the callers on the other end of the line.

But they needed to balance efficiency of service with efficiency of cost. Keeping latency low at a global scale is essential to customers trusting Hiya’s products, but it isn’t easy — or inexpensive. Sacrificing it was not an option, so they had to analyze their cost centers to see where they could cut back.

One of Hiya’s key cost tradeoffs centers on data availability: The more data they make accessible in every region, the more likely it is that they’ll be able to categorize calls correctly in a matter of milliseconds. But it’s more expensive to make more data available in more parts of the world, presenting a classic dilemma between quality and cost.

“CloudZero began figuring heavily into our post-facto decision-making process,” Dan said. “When we deploy a method of addressing customer needs, we can analyze how it impacted our AWS costs, and we can direct engineering resources at the issues with more accuracy.”

Right away, CloudZero eliminated the time Dan and his team had been spending on his homegrown tool. He redirected the week per month previously used for managing it toward projects associated with Hiya’s global objectives.

Now, Dan said he and his team rely heavily on CloudZero for spend exploration. That is, when they notice cost spikes for a particular set of customers or in a particular region, they can drill into the resources underlying the spend, determine which is responsible, and propose initiatives to remediate the issue.

“The ad-hoc exploration is huge,” Dan said. “I can limit down to a set of tags, drill down into what’s expensive and what isn’t, and come up with informed ideas of what might be driving that cost. Then, I can share that view with my colleagues to see what they think.”

Giving his developers a specific area to investigate has been much more impactful than trying to break down a general problem area with homegrown tooling.

Enriches the company’s understanding of their global customer base

CloudZero data has already revealed disparities of cost-efficiency in different regions of the world. That is, it’s more expensive for Hiya to support certain regions than others, all because of different phone habits. At first, Dan and his team were surprised to see those disparities — “Everyone assumes that behavior across the world is the same,” he said.

But CloudZero data has fed the “educational side of things,” as Dan put it. Phone plans vary in different parts of the world; whereas some plans enable unlimited data and calls, other plans charge as you go.

“If you pay for a pickup, that’s going to impact how you use the phone,” Dan said, mentioning that plans like these give rise to “signaling” patterns, where people will let the phone ring a certain number of times to tell the caller a certain message. This way, they don’t pay for a pickup, but they still communicate.

CloudZero has allowed Hiya to sort the regions they serve by cost-efficiency — where their margins are highest, and where they could improve. Consequently, Hiya has been able to have more informed strategic conversations about how to raise all regions to a common benchmark.

Given the data CloudZero has already provided them, Hiya will now be able to answer “what if” questions around new business initiatives. “It will inform whether we go forward with new initiatives,” Dan said. “Whether we launch in new regions, whether we engage new partners, how we structure those deals, where we focus our energy.” 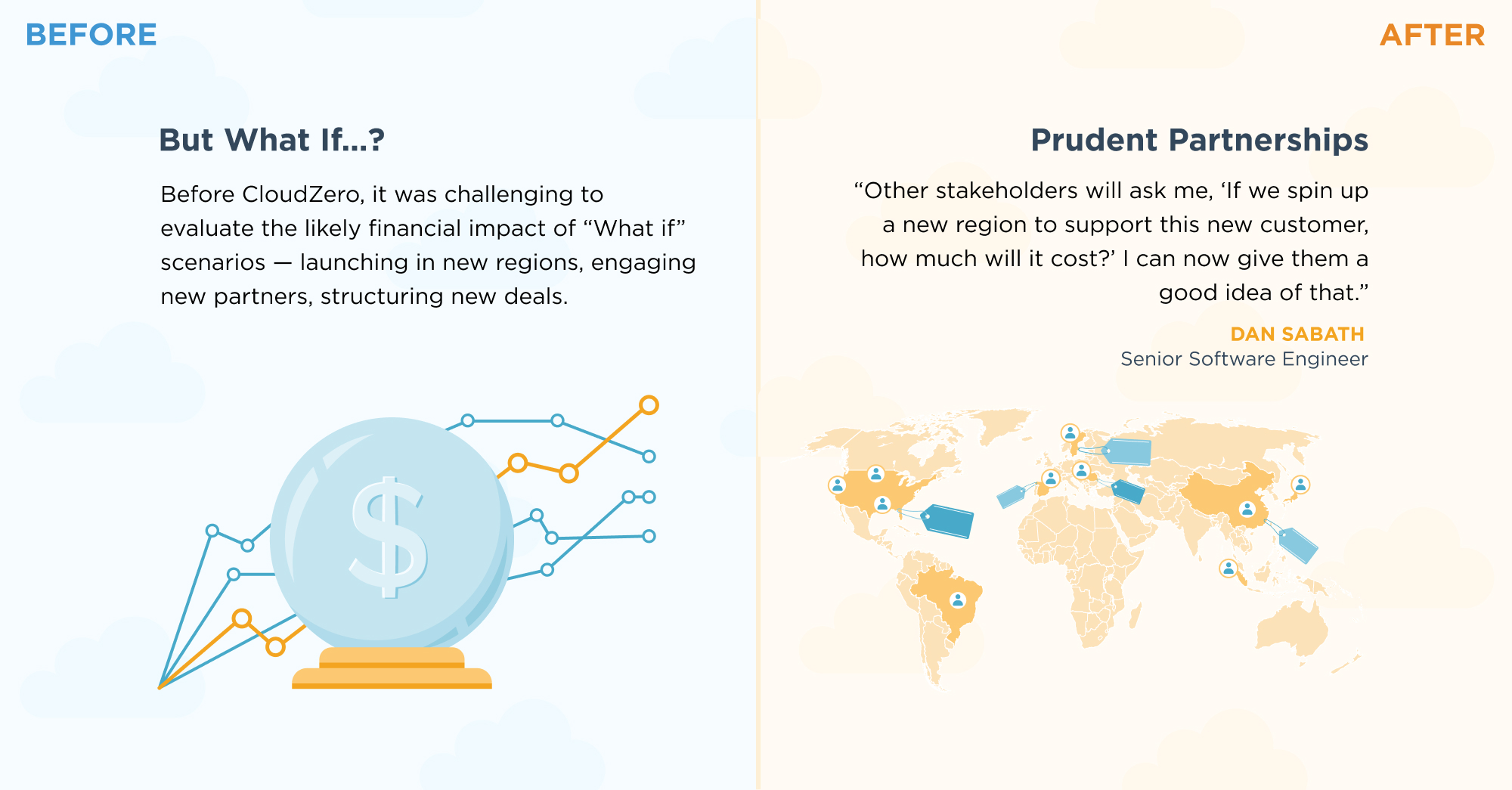 Moreover, CloudZero helps Hiya distinguish “cheap” from “frugal.” “Cheap,” as Dan sees it, would be trying to spend as little as possible — thinking that reducing AWS costs is always a noble goal. “Frugal,” on the other hand, means putting cloud spend in business context: understanding what spend is necessary and what isn’t based on its ROI.

“Other stakeholders will ask me, ‘If we spin up a new region to support these new customers, how much will it cost?’ I can now give them a good idea of that.”

When asked how he feels at work now versus when he was managing their previous homegrown tool, Dan said that now, he’s much less frustrated. “I can get the answers my team needs a lot faster than I used to. I had accurate information, but it took me a long time to get it. I don’t have to maintain that architecture anymore, and that’s something I’m very grateful for.”

Implemented CloudZero to evaluate the cost of different global regions and assess the cost impact of new engineering initiatives.

SCHEDULE A DEMO WITH OUR TEAM

Untangle Your Cloud Cost Once And For All

Reading about CloudZero is nothing like seeing it for yourself. In your personalized demo, we’ll cover how you can: