How To Reduce Strife Between Engineers And Finance

Engineers and the finance team don’t always see eye-to-eye. If your engineers get defensive when they’re asked about costs, here’s how you can help.

The conflict between engineers and finance is notorious. Finance thinks engineers just want to build cool products regardless of the cost. Likewise, engineers often feel their every move gets monitored by hawkish finance employees who seem to only care about costs.

How can you, as a leader, encourage both teams to work together harmoniously? And what can you do to diffuse the situation when engineers feel attacked for their infrastructure choices?

The answers to these questions aren’t always intuitive when something goes wrong, but with the right strategy, you can lead both teams to success.

These suggestions should help get your engineers into finance-oriented mindsets and show your finance team things from the engineers’ perspective.

Whenever Possible, Align Goals Between Departments

If finance and engineering are constantly butting heads, it’s likely due to a lack of common ground between the two teams. Usually, the main source of strife is that engineers and finance employees have very different goals.

Whereas the finance department wants to control costs, engineers are usually judged based on how quickly they can release functional features and updates.

A finance employee looks at a particular project and sees the margin growing thinner. Still, the engineers responsible for that project know they must push out a feature as quickly as possible, even if it means spending a little more.

Engineers’ jobs would be at stake in many cases if they didn’t consistently build robust, usable products on a reasonable time scale. Engineers understandably sacrifice cost awareness to focus on functionality or speed with their jobs hanging in the balance.

Aligning interdepartmental goals as much as possible should help to reduce friction.

If the company feels strongly that costs need to be the top priority in a given project, ensure the engineers working on that project understand they will be evaluated first on the economic outcome and only after that on the innovation velocity.

Similarly, if costs for a certain project are a lower priority — if a critical update to address a security threat needs to be pushed out as soon as possible, for example — communicate that to the engineers and the finance team so everyone shares that common goal.

Most people want to do the correct thing. It’s incumbent on the company's leadership to clearly state the correct goal for both departments in a way that provides clarity and alignment.

What Do You Do When You Can’t Find Common Ground?

Sometimes, even the best attempts to align goals and get everyone on the same page fall short.

Engineers may push back against new finance constraints, arguing that they will only muddy the waters and lead to sacrifices in functionality. Or they may resist taking on the new responsibility of owning the costs of a project and become defensive when confronted about those costs.

Regardless of why it happens, there are some things you can do to reduce conflict and lower your engineering team’s defenses.

It seems like just a few short years ago when companies could afford to have a “ship at all costs” mindset. What mattered was the product; prices could be adjusted later to compensate for whatever it took to build that product.

Now, however, the economic climate is very different. If a company doesn’t keep costs under control, losing money is a real possibility — or even a likelihood.

The engineers on your team were trained to believe functionality and user experience trump financial considerations. And they are right, to a point. Cutting costs simply for spending less can undermine products and features, causing the business to lose customers and revenue.

However, there is absolutely no reason engineers can’t pay attention to costs during the development process and learn what it means to make smart infrastructure choices.

You don’t need to build a full “finance for engineers” training course. In many cases, engineers simply need visibility into costs and a little explanation of the company’s cost-related goals.

As you communicate with your engineering team, it’s worth explaining the metrics and terminology they’ll encounter as they begin to track their costs. That’s because saying that the company cares about costs can mean several different things.

Your company might ultimately want engineers to use more of one service than another, work toward healthier margins, keep the total budget under a certain threshold, and build features catered to a customer demographic that is cheaper to support or any other goals.

Make this information as clear as possible, so everyone stays on the same page.

Remember that engineers love efficiency. If you provide them the ability to see how their decisions impact spending—coupled with some training around what they should do with that knowledge—you might be surprised how well engineers take to maximizing cost efficiency.

Use the right tools

Allowing your engineers to look at the budget and see how much the company spends on cloud services can give them a better understanding of how their choices affect the bottom line.

However, simply giving them a total and asking them to lower that number won’t help.

Engineers need to see how their everyday decisions directly impact spending. To be able to manipulate a project's cost to fit within the given budget, they will need to answer several questions during the development process.

To answer these questions, engineers need tools that break down costs at a granular level. They won’t be able to judge which services should be cut or optimized if they can’t see, in detail, how much those services cost.

Importantly, engineers need to have access to this information during development.

Handing them a monthly bill and saying it’s too high does nothing to help anyone because engineers can’t change their past decisions. They need to see their cost decisions play out in real-time to be able to make changes before costly mistakes get written in stone. 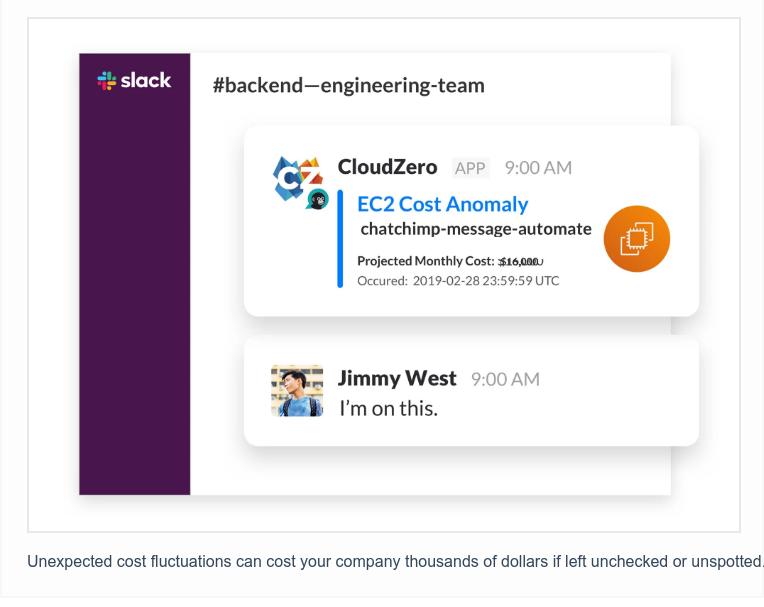 Many engineers work in a climate where they’re forced to push out products at speed without much cost data to inform their decisions.

Then, when the bill returned higher than the finance department wished, the engineers took the brunt of the blame even though they were flying blind during development.

With a dynamic like that, it’s no wonder engineers feel defensive and averse to taking on responsibility for costs.

If you’re running into this problem within your organization, try to identify a few places where you could offer a carrot instead of a stick.

If the finance team makes an effort to give credit to the engineers for the things they’re doing right, engineers will be more likely to work toward those successes again. Over time, the strife between the two teams should diminish.

Calling specific individuals for doing a great job can be beneficial. Rewarded employees are happy employees. High morale and positive feelings in the workplace keep engineers content and focused on achieving even higher goals next time.

You Bring The Goals And The Positive Culture, CloudZero Will Provide The Cost Visibility

You might think it’s comparatively easy to communicate goals and expectations to your engineers and give credit to employees who perform particularly well.

But how can you give your engineers the cost data they need to make informed decisions when your cloud bill only includes a lump sum?

That’s where a platform such as CloudZero comes in. With CloudZero, you can see the individual unit economics of each product, feature, customer demographic, or any other metric you set, so you can see what’s working well and what should be tweaked.

You can also send daily updates to each engineer’s Slack messages, so he or she stays up to date on the project’s current cost total about the budget limit.

to see CloudZero for yourself.