5 Tactical Ways To Align Engineering And Finance On Cloud Spend

2020 State of DevOps Report: The Newest Metric To Make It Into the DevOps Evolution

In the past two years, a new theme has emerged and started to pop up more and more throughout the annual State of DevOps report. Read what new trend we're seeing in 2020.

Every year, I look forward to the release of the annual State of DevOps report (that’s the kind of exciting life I lead!).

The evolution and adoption of DevOps in the past decade has been incredible — and this report always helps show what’s the next big thing that high-performing teams are adopting.

The 2020 State of DevOps report was just released a couple weeks ago and as usual, it was filled with all kinds of insights.

If you’re new to DevOps (or have been too busy automating releases and calculating MTTR to pay attention to annual surveys!), here's a little background.

The State of DevOps Report is an annual survey of organizations about their DevOps culture and practices — and how they relate to company performance. Originally written by or in partnership with DevOps legends like Gene Kim, Jez Humble and Nicole Forsgren — the State of DevOps has helped to define and cement a set of practices associated with “high performing” IT organizations.

The Newest Theme To Make an Appearance: Cloud Cost

If you’ve been following the reports for years, you already know that they are a great way to spot trends in the industry. For example, as “shifting security left” and DevSecOps were picking up steam, they began to take a more prominent role in the reports.

In the past two years, a new theme has emerged and started to pop up more and more throughout the report: cloud cost. It has the same feeling today that DevSecOps had five or so years ago. It may not be the first thing that teams talk about, but it’s there — and is a trend worth watching.

The reports show that not only are engineering and DevOps being asked to care about cost, but that good cost culture and cost-conscious engineers are associated with high-performing DevOps teams.

2019 Report: Cost Predictability Is a Benefit to Moving To the Cloud

In 2019, the report dedicates a page to cloud cost — mostly in terms of how it compares to on-premises costs. It explains that the cloud has introduced scale — along with better visibility into cost. However, when engineering decisions drive cost without visibility or a chargeback model, it “can lead to wildly variable costs that go unchecked, making cloud costs unpredictable.”

To combat this, the authors suggest organizations better align incentives so that system owners have both visibility to build more efficient systems, and the incentives to do so.

This year, there was a pretty stark shift to the context in which cost was discussed.

On one chart, the authors show the core responsibilities for platform teams at different levels of DevOps maturity.

Here’s the key mention: the bottom row shows that as teams mature in their DevOps evolution, providing visibility into costs becomes more of a responsibility. 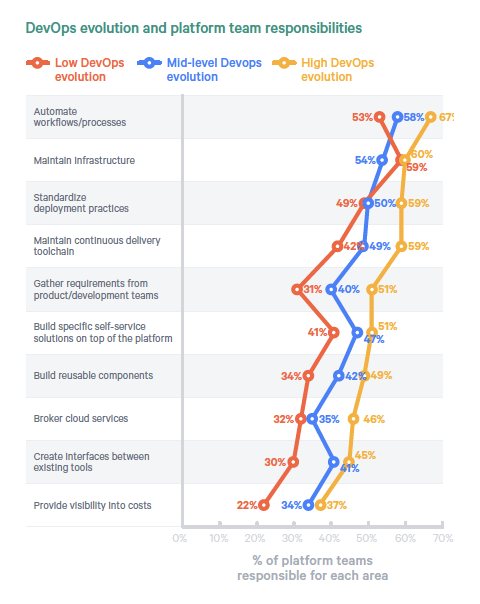 This minor data point is expanded on in the case study that follows.

The report features a case study by Mike Stahnke, vice president of platform CircleCI, where he lists the four things that he uses to measure success for his team: availability, security, developer productivity — and cost.

In this context, cost isn’t just about the cloud or on premise — and it’s not about saving money for the sake of saving money. It’s a key metric to be considered as a tradeoff in building a highly available, innovative and profitable platform.

“Our platform engineering organization was created with availability as a key objective. We standardized our tools and capabilities so we could thoroughly understand how they work, what the failure modes are, the lifecycle expectations of a component, and to make sure components can handle millions of requests per hour.

"On the other side of the coin is cost. You can improve availability by overprovisioning capacity or buying additional tooling, but that may cause you to exceed your cost targets and depress your margins. You can lower costs by turning off services or capabilities, but that can hurt your resilience and availability. That’s why these two items are inextricably coupled.”

Next, he discusses how to measure the ROI of different aspects of your platform. For CircleCI, a key metric they measure and make available to their internal teams is “work unit cost,” so cost is put in context even as their business changes and grows.

What do these mentions of cost, which are peppered throughout the last two years of reports, actually mean?

It definitely shows that companies who embrace DevOps are shifting the ways that they think about cost.

The cloud made infrastructure available on demand and virtually limitless. A shift in infrastructure delivery requires a shift in how we manage its cost – and companies are finally making that shift, just like they shifted performance and security in years past.

From those earlier precedents, we know that information and knowledge silos slow things down and cause accountability problems. Shifting left puts responsibility for critical functions in the hands of cross-functional, interdisciplinary teams.

Companies who have adopted DevOps are masterfully measuring, automating, and decentralizing metrics about just about everything else — so it’s natural that cost is next. Trendsetting companies, like Netflix and Lyft are already doing it — and we’re seeing many others follow every day.

Watch out security, cloud cost is about to shift left. Maybe they’ll make next year's report about it.

Looking to get ahead of the trend and build a culture of cost transparency and autonomy?

Check out CloudZero, the cloud cost intelligence platform that aligns cost to your business and delivers relevant cost metrics to engineering teams.